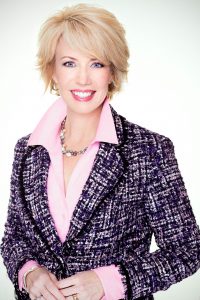 Ashley Swearengin is the current President and CEO of the Central Valley Community Foundation. From 2009-2017, she served as the Mayor of Fresno after a distinguished career in the business world. The Pat Brown Institute honored Swearengin at its 2018 dinner, Women Transforming Our Worlds.

The Pat Brown Institute spoke with Ashley Swearengin about her professional leadership experiences and her advice for the next generation.*

Pat Brown Institute (PBI): Tell us a bit about your work and the role that the Foundation plays in the Central Valley.

Ashley Swearengin (AS): Our Community Foundation covers six counties in Central California, including Fresno, Madera, Tulare, Kings, Merced and Mariposa. So it’s a really large geographical area. There are almost 3 million people living here. The Valley is the future of California. Where the Central Valley goes, so goes the rest of the state and that has a huge impact on the nation as well. At the Foundation, we are very aggressively trying to turn the Valley in the right direction. Our job is to champion the cause of the Central Valley and we use the tools of philanthropy to try to increase the profile of our region and attract large sums of additional investment into the areas that need it most.

PBI: What kind of projects does CVCF focus on?

AS: My team and I joined the Community Foundation in January of 2017. We’ve been on the ground a little over a year and in that time we have identified four priority areas: 1) jobs and the economy, 2) educational workforce development, 3) high quality, healthy neighborhoods, and 4) a quality environment for future generations. Those four policy area have really been our anchors in terms of where we directly take on initiatives and where try to align our grant dollars.

Those who ultimately achieve their bold goals are the ones who are willing to fight and work hard, even when no one else is looking.

PBI: Before you joined the Foundation you served as the Mayor of Fresno. How did your work help to transform the City of Fresno?

AS: I was first elected in 2008, so five of my eight years were in the middle of the Great Recession. It was an intense period; we were often referred to as the next big city in America that was going to declare bankruptcy. We tried to correct course by creating conditions that were right for investments, whether for small business development or the revitalization of distressed neighborhoods. We changed the regulations to help invite investments back into the City and then we used our infrastructure dollars to begin the process of tipping Fresno in the right direction. We did a very serious course correction and I am cautiously optimistic that we have wind in our sails now.

PBI: What advice would you provide to young women who want to change their communities?

AS: I would provide the same advice I would often give to students. First of all, pay attention to what you are good at and what you are interested in. While you may not necessarily see a specific career path, think about what you love doing and what you are good at doing and pursue those things with excellence. I would also preach the importance of persistence. Those who ultimately achieve their bold goals are the ones who are willing to fight and work hard, even when no one else is looking.