The Pat Brown Institute’s Annual Conference, Should California Have Its Own Trade Policy?, was held on October 5, 2017 at the L.A. Hotel Downtown.

Presented in association with the Los Angeles Economic Development Corporation (LAEDC) and the World Trade Center Los Angeles (WTC LA), the conference brought together elected and appointed officials; business, labor, as well as environmental leaders; and community members and students to learn about California’s role in international trade and investment.

The conference was designed to encourage Californians to promote and craft inclusive and forward-looking policies that will benefit multiple stakeholders.

Frustrated Foreign Leaders Bypass Washington in Search of Blue-State Allies
The Washington Post, November 18, 2017 – opens in a new windowArticle
As many foreign leaders are having difficulty working with the United States federal government on issues such as trade and climate policy, they are increasingly seeking to develop constructive relations with state and municipal governments. In response, local governments are establishing offices and creating positions that will help them manage and strengthen alliances with foreign counterparts.

California Companies Have a Gold Mine in Asia
The Sacramento Bee, October 18, 2017 – opens in a new windowArticle
Governor Jerry Brown’s highly visible efforts to partner with foreign governments to reduce carbon emissions is paving the way for more trade opportunities for the state. Indeed, having already started to develop the technologies needed to cut carbon, California companies are in an ideal position to assume a larger role in the Pacific Rim economy and to grow their businesses overseas.

In NAFTA Talks, Much at Stake for California Ranchers and Farmers
KQED News, August 17, 2017 – opens in a new windowArticle
The NAFTA negotiations help to reveal the divides on trade within California’s agriculture industry. While beef ranchers argue that the lack of tariffs and trade barriers are good for business, asparagus farmers believe that they are struggling because of free trade with Mexico.

Among California Voters, Support for Trade Deals Doesn’t Fall Clearly Along Party Lines
Los Angeles Times, March 30, 2016 – opens in a new windowArticle
According to a recent LA Times poll, while Californians are generally optimistic about the economy, voters from both political parties are concerned about the impact of trade deals on their wages and job prospects. At the same time, most of the voters polled claimed not to know enough about the Trans-Pacific Partnership agreement to have an opinion about it.

Could the End of DACA Hurt Foreign Investment in Southern California
Los Angeles Daily News, October 29, 2017 – opens in a new windowArticle
Local business leaders fear that President Trump’s strict immigration policies will turn foreign investors away from the United States in general and Southern California in particular. As Stephen Cheung, the president of the World Trade Center Los Angeles noted, “We’re putting off this image that we’re not welcoming to the international community, to both their immigrants and their investments.” 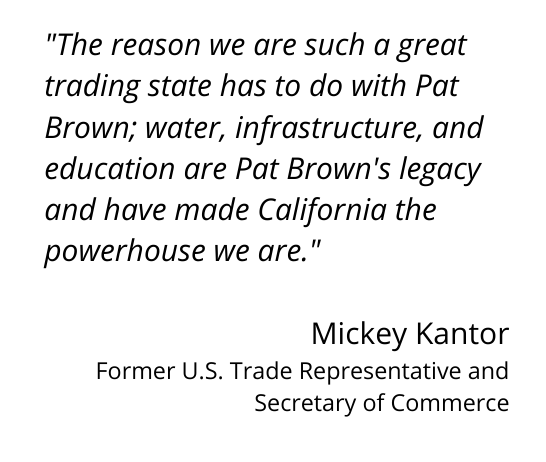