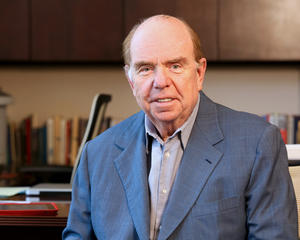 Robert M. Shrum is the Director of the Jesse M. Unruh Institute of Politics and the Carmen H. and Louis Warschaw Chair in Practical Politics at the University of Southern California, where he is a Professor of the Practice of Political Science in the Dornsife College of Letters, Arts and Sciences. He was a political strategist and consultant who served as senior advisor to the Kerry-Edwards campaign in 2004 and to the Gore-Lieberman campaign in 2000. The Atlantic Monthly described him as “the most sought-after consultant in the Democratic Party.” He will be participating in our October 5th policy conference, Should California Have its Own Trade Policy?

The Pat Brown Institute spoke with Professor Shrum about the results of a USC Dornsife College of Letters, Arts and Sciences/Los Angeles Times Poll from March 2016 (during the presidential primaries) that surveyed California voters about trade.*

Pat Brown Institute: Based on your March 2016 poll, what is your sense of where California voters are in this idea of “Free trade or Not?”

Robert Shrum: I think California voters in general are misinformed about the impact of trade on the state. When you look at the poll, 59% say trade with other countries cost American jobs. 58% disagree that it leads to higher wages. California, especially the port of Los Angeles, is the epicenter of trade across the Pacific and with Asia. It is one of the largest economic drivers in the city, the region, and arguably the state. I don’t think it cost jobs here but Californians do.

“I think California voters in general are misinformed about the impact of trade on the state.”

PBI: When you looked at the poll by variables like region, party, race, age, what divisions turn up on the trade issue?

RS: 62% of Trump supporters during the primaries said free trade sent jobs overseas. 67% of Trump supporters said they thought trade hurt American wages. With Hillary Clinton supporters, it was more 50/50 split and a 51/49 split, respectively. For Bernie Sanders supporters, 66% believed the trade ends up sending jobs overseas and 65% said they thought trade hurt American wages. What’s happened is the pro-trade side has lost the message argument.

PBI: Is it possible that, based on your poll, Californians are no more pro-free trade than the Midwest?

RS: Based on this poll, that is the case.

PBI: That goes a little bit against the conventional wisdom, wouldn’t you say?

RS: Yes, it does. The conventional wisdom is understandable. Most of the people who comment on this understand that California, Los Angeles, San Francisco, and Oakland benefit immensely from trade across the Pacific.

*The interview has been edited and condensed for clarity.