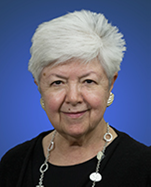 Ambassador Vilma Martinez, the first woman to represent the United States in Buenos Aires as Ambassador, was appointed to the Los Angeles Board of Harbor Commissioners by Mayor Eric Garcetti and confirmed by the Los Angeles City Council on November 19, 2013.

Ambassador Martinez was previously a partner at Munger, Tolles & Olson, where she specialized in federal and state court commercial litigation, advising companies on steps to enhance their equal employment opportunity policies and build diversity and inclusion initiatives into their business plans.

Prior to Munger, Tolles & Olson, Ambassador Martinez served as president and general counsel of the Mexican-American Legal Defense and Educational Fund (MALDEF). Ambassador Martinez’s previous professional endeavors also include work as litigation associate at Cahill, Gordon & Reindel in New York, and as a staff attorney with the NAACP Legal Defense Fund.

Enriching Ambassador Martinez’s experience is a history of continued public service on numerous nonprofit boards. She served as chairman of the Board of Regents of the University of California from 1984 to 1986, and was a regent from 1976 to 1990. She previously served as a board member of the Los Angeles Philharmonic Association and as a member of the Council on Foreign Relations. She chaired the Pacific Council’s Study Group on Mexico and served on the advisory boards of Columbia Law School and the Asian Pacific American Legal Center of Southern California.

Ambassador Martinez was appointed by President William Clinton to serve on his Advisory Committee on Trade Policy and Negotiations from 1994 to 1996. She was appointed by President Barack Obama to serve as the United States Ambassador to Argentina from 2009 to 2013. In 2013, she was awarded the Order of May (the highest honor awarded by Argentina to a foreign national) in recognition for her tenure and for her work on behalf of improving mutual cooperation and understanding.  Currently, she serves on the Boards of The Pacific Council on International Policy and The LBJ Foundation.

Ambassador Martinez has been a popular speaker at educational institutions around the nation, including Harvard Law School, Yale University, University of Notre Dame, Stanford University, and her alma mater, the University of Texas at Austin. Her awards include:

Ambassador Martinez earned a bachelor of arts from the University of Texas at Austin and a bachelor of laws from Columbia Law School. She is a member of the California Bar Association.